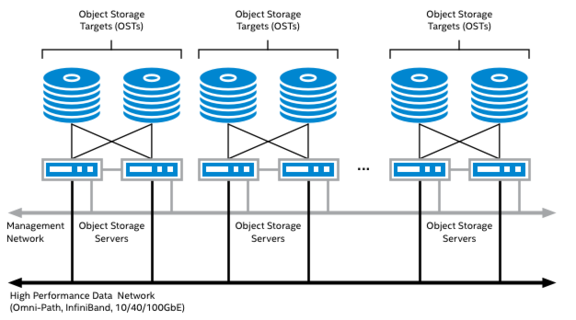 The physical design of a typical OSS building block is very similar to that of the MDS. The most significant external difference is the storage configuration, which is typically designed to maximize capacity and read/write bandwidth. Storage volumes are commonly formatted for RAID 6, or in the case of ZFS, RAIDZ2. This provides a balance between optimal capacity and data integrity. The example in Figure 3a is a low-density configuration with only 48 disks across two enclosures. It is more common to see multiple high-density storage enclosures with 60 disks, 72 disks, or more attached to object storage servers, an example of which is shown in Figure 3b. 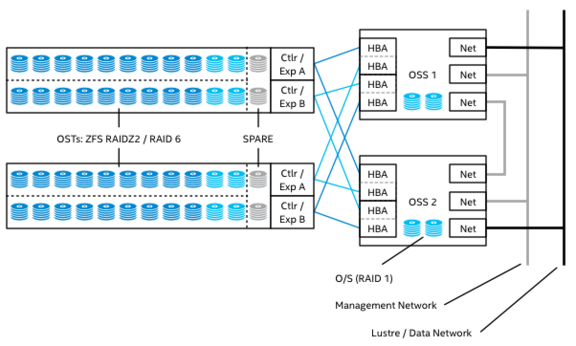 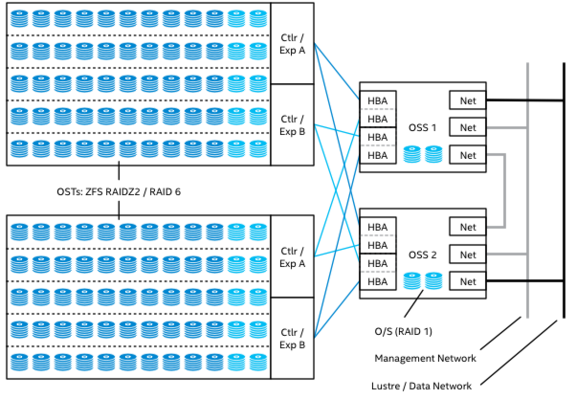 Note: obdfilter-survey write benchmark on one single ZFS 0.6.5 OST using 8 objects and 64 threads. Comparison of 4 different ZFS pool layouts: 8+2, 9+2, 10+2 and 12+2. The primary Y axis measures global performance, the secondary Y axis measures the efficiency of a single disk, using only the active disks (8/9/10/12) for the calculation. The test was performed on a 60-HDD JBOD.
Retrieved from "http://wiki.lustre.org/index.php?title=Lustre_Object_Storage_Service_(OSS)&oldid=2994"
Categories: