The Data-on-MDT project aims to achieve good performance for small file IO. The motivations for this and current behaviour of small file IO are described in Data on MDT Solution Architecture document.

This high-level design document provides more details about approach to implement this feature in the Lustre file system.

While Layout Enhancement project is responsible for a new layout, we must add appropriate changes in LOV to properly recognize the new layout and use LMV/MDC cl_object interface to work with data. LOV should understand and properly handle also maximum data size for the new layout. Another part of related work is to change `lfs` tool so it will be able to set new layout on directory as default.

CLIO should be able to work with MDT

MDC devices must become `cl_device` and part of CLIO stack and be used by LOV for IO if new layout. Some unification is possible between OSC and MDC methods.

That code is orthogonal to the current MDC and is placed there for simpler access to import and request-related code. This code will become eventually the generic client that will be used by MDC and OSC.

Unified Target made this possible, but specific handlers do not currently exist for the MDT. They will be added as part of this work.

The `lfs setstripe` command must be extended to recognize new layout setup and set maximum size for it.

The LOV implements new interface for new `LLT_DOM` layout type. This set of methods are closely related with `LLT_RAID0` interface and some may be reused.

Upon new object allocation the LOV does the following:

so the proper stack of objects is built with using sub-objects points to MDC.

The `lov_layout_dom` refers just to single object below LOV.

For DOM we need pass IO through the MDC device, therefore LOV should have such target similar with other targets pointing to OSCs. With DNE in mind we should be able to query FLDB by FID to get proper MDC device according. The LOV implements own `lov_fld_lookup()` for that and may need to setup also own FLD client OR use one from LMV.

MDC devices are added in client LOV config log like them are added to the LMV. Upon new MDC addition the device stack may be not yet ready and must be saved to be added later in the `lov_device_init()`. The LOV device has new arrays of MDC targets `ld_device::ld_md_tgts[]` with the same type `lovsub_device` as used for OSC but with different set of methods.

Unlike OSC the MDC might be cleaned up before LOV because they are controlled still by MD stack of devices. The problem can be solved by taking extra reference for MDC device at LOV or better by notification of LOV about MDC is going to shutdown.

The `lovdom` device is much simpler than `lovsub_device `because it is not a top device of new sub-stack but part of the stack. That is why device alloc is different but at the same time we reuse other `lovsub` methods. 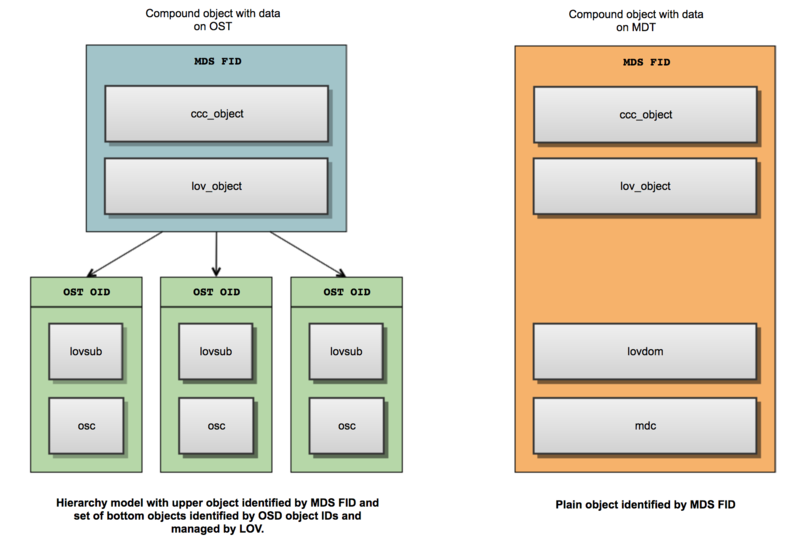 Considering there is always single stripe, the lov+lovdom layers are trivial and have almost no extra functions/checks. All real code goes to the MDC layer.

The `cl_io_operations:cio_io_iter_init()` method for lovdom layer checks that operation is not out of `max_stripe_size` boundary. The Phase I action is just `-ENOSPC` return code, the Phase II starts migration at this point.

MDC fully reuses OSC CLIO methods with several exceptions, e.g. the device initialization methods will be different as it must call `mdc_setup()` instead of `osc_setup()`. That means we can separate that code from OSC and make it generic.

All IO for DOM object is done under `PW LAYOUT` lock. It protects whole data on MDT exclusively. The llite is responsible for that and MDC CLIO locks operatoins are all lockless to avoid real lock enqueueing.

With data on MDT the `GETATTR` request from MDT returns both `OBD_MD_FLSIZE|OBD_MD_FLBLOCKS` along with other attributes. Therefore glimpse is disabled by setting inode flag `LLIF_MDS_SIZE_LOCK` for DOM objects.

New set of handler is added at MDT, they are needed to handle punch/read/write operations.

New operations are added to the MDT and sends IO requests directly to the OSD bypassing MDD and LOD. Unified Target uses OBD interface for IO methods, so MDD OBD operations are extended with the following:

LOD understand new DOM layout by checking `lsm` pattern with `lsm_is_dom(lsm)` helper function. It must not use any OSP subdevices for such layout but only local OSD target. All assertions and check on pattern should be extended from "only `RAID0` is supported" to "`RAID0` AND `DOM` are supported".

MDT stack doesn't filter `BLOCKS|SIZE` attributes from DOM object and return them to the client.

As a first implementation, a user limit the DOM blocks can be provided without any code changes: for instance, if user want to set 1GB limit for DOM and the maximum size of each file on MDT is 1M, then user can just set the inode limit to 1024. This approach is in conflict with a real inode limit but provides a initial path to quota control.

A more robust quota for Data on MDT can be executed in two phases:

In current quota framework, each MDT has only one MD qsd_instance associated with it's OSD device

This will be expanded to a list, and two `qsd_instance` will be linked in the list for each MDT: one is MD for metadata operations, the other is DT for data operations. Write on MDT will use the DT `qsd_instance` to enforce block quota, and metadata operations will have to enforce both block and inode quota with these two qsd_instances. For ZFS OSD, once block quota enabled on MDT, the approach of estimating inode accounting by used blocks will not work. Using our own ZAP to track inode usage will be the only option. Ideally, OpenZFS will support inode accounting directly.

Because space on a MDT is often limited compared to a OST, an administrator may want to set more restricted block limit to MDTs rather than sharing same limits with OSTs. To support private limits for DOM, following changes are required:

Grant support on MDT require major MDT stack changes because we need to account all changes including metadata operations with directories, extended attributes and llogs. Initial grants support will be implemented as MDT target support for grants basically. It is able to report grants and declare their support during connection, but returns zero values (means IO to be sync) or some rough estimated values. Further work will be done in accounting all operations with data and report real values. This can be done during declaration phase of transaction.

Optimization is to avoid glimpse requests by returning back `SIZE` and `BLOCKS` attributes.

This optimization might help with partial page updates, when client have to read page first, adds new data in it and flush it back finally.

This optimization can truncate file during open if `O_TRUNC` flag is set.

All readahead optimizations are based on fact that it is possible to return some data from small file in EA buffer which is quite big now.

Check all cases we optimize

Write at the end of file with partial page

Regular MD operations should benefit from Data-on-MDT because there are no OST requests, basically only stat should benefit noticeable because open uses precreated objects and destroy is not blocked but OST objects destroy.

Use mdsrate to perform the following operations:

Files with data The mdsrate tool must be modified to create DoM files with amount of data to test DoM files performance in common case.

The `postmark` utility is designed to emulate applications such as software development, email, newsgroup servers and Web applications. It is an industry-standard benchmark for small file and metadata-intensive workloads.