What follows is a summary of the presentation I held at the LAD'15 developers meeting describing a proposal for implementing multi-rail networking for Lustre. The full-size slides I used can be found here (1MB PDF). A few points are marked to indicate that they are after-the-talk additions. 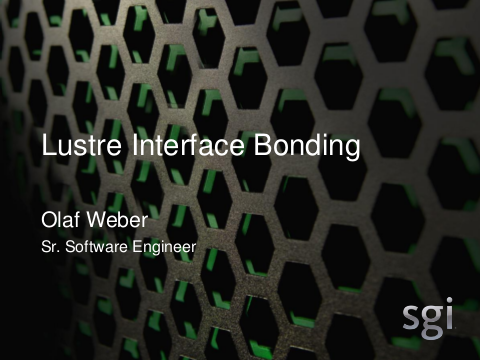 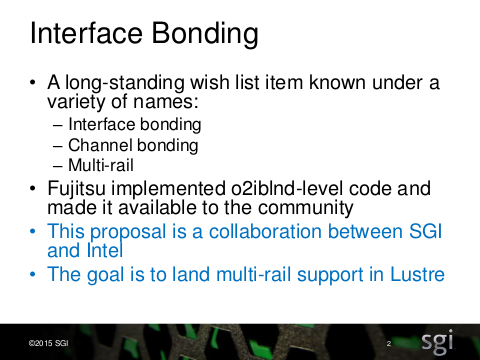 Under various names multi-rail has been a longstanding wishlist item. The various names do imply technical differences in how people think about the problem and the solutions they propose. Despite the title of the presentation, this proposal is best characterized by "multi-rail", which is the term we've been using internally at SGI.

Fujitsu contributed an implementation at the level of the infiniband LND. It wasn't landed, and some of the reviewers felt that an LNet- level solution should be investigated instead. This code was a big influence on how I ended up approaching the problem.

The current proposal is a collaboration between SGI and Intel. There is in fact a contract and resources have been committed. Whether the implementation will match this proposal is still an open question: these are the early days, and your feedback is welcome and can be taken into account.

The end goal is general availability.

At SGI we care because our big systems can have tens of terabytes of memory, and therefore need a fat connection to the rest of a Lustre cluster.

An additional complication is that big systems have an internal "network" (NUMAlink in SGI's case) and it can matter a lot for performance whether memory is close or remote to an interface. So what we want is to have multiple interfaces spread throughout a system, and then be able to use whichever will be most efficient for a particular I/O operation. 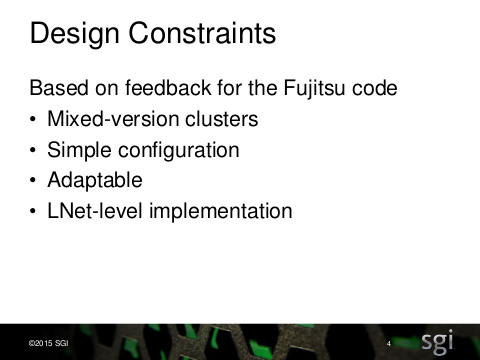 These are a couple of constraints (or requirements if you prefer) that the design tries to satisfy.

Mixed-version clusters: it should not be a requirement to update an entire cluster because of a few multi-rail capable nodes. Moreover, in mixed- vendor situations, it may not be possible to upgrade an entire cluster in one fell swoop.

Simple configuration: creating and distributing configuration files, and then keeping them in sync across a cluster, becomes tricky once clusters get bigger. So I look for ways to have the systems configure themselves.

Adaptable: autoconfiguration is nice, but there are always cases where it doesn't get things quite right. There have to be ways to fine-tune a system or cluster, or even to completely override the autoconfiguration.

LNet-level implementation: there are three levels at which you can reasonably implement multi-rail: LND, LNet, and PortalRPC. An LND-level solution has as its main disadvantage that you cannot balance I/O load between LNDs. A PortalRPC-level solution would certainly follow a commonly design tenet in networking: "the upper layers will take care of that". The upper layers just want a reliable network, thankyouverymuch. LNet seems like the right spot for something like this. It allows the implementation to be reasonably self-contained within the LNet subsystem. 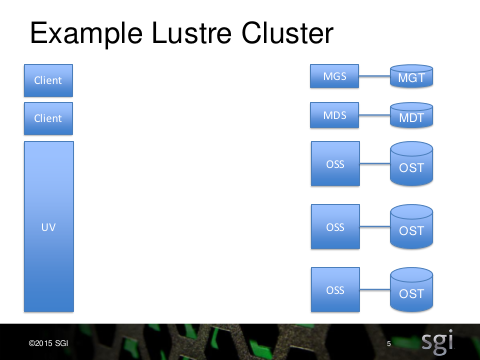 A simple cluster, used to guide the discussion. Missing in the picture is the connecting fabric. Note that the UV client is much bigger than the other nodes. 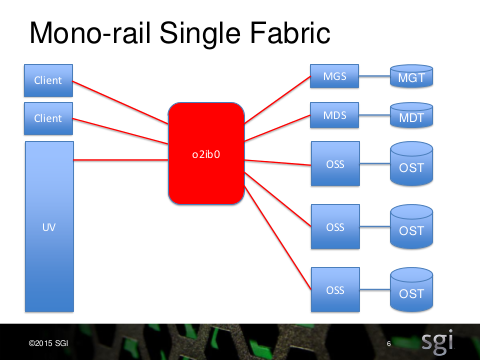 The kind of fabric we have today. The UV is starved for I/O.

You can make additional interfaces in the UV useful by defining multiple LNets in the fabric, and then carefully setting up aliases on the nodes with only a single interface. This can be done today, but setting this up correctly is a bit tricky, and involves cluster-wide configuration. It is not something you'd like to have to retrofit top an existing cluster. 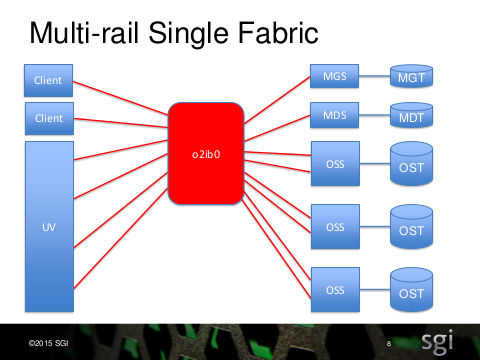 An example of a fabric topology that we want to work well. Some nodes have multiple interfaces, and when they do they can all be used to talk to the other nodes. 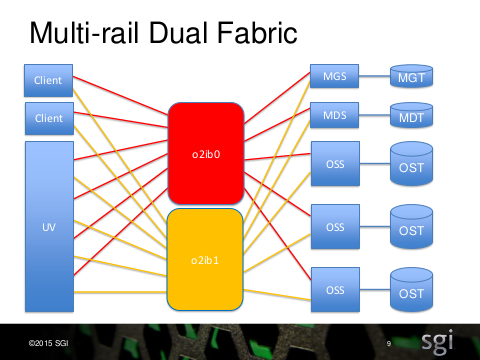 Similar to previous slide, but now with more LNets. Here too the goal is active-active use of the LNets and all interfaces. 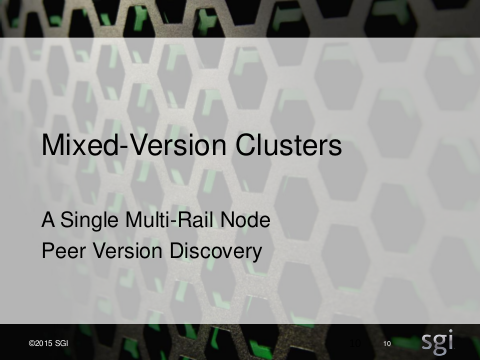 This section of the presentation expands on the first item of Slide 4. 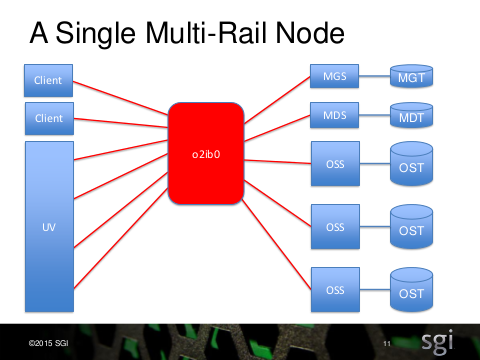 Assume we install multi-rail capable Lustre only on the UV. Would that work? It turns out that it should actually work, though there are some limits to the functionality. In particular, the MGS/MDS/OSS nodes will not be aware that they know the UV by a number of NIDs, and it may be best to avoid this by ensuring that the UV always uses the same interface to talk to a particular node. This gives us the same functionality as the multiple LNet example of Slide 7, but with a much less complicated configuration. 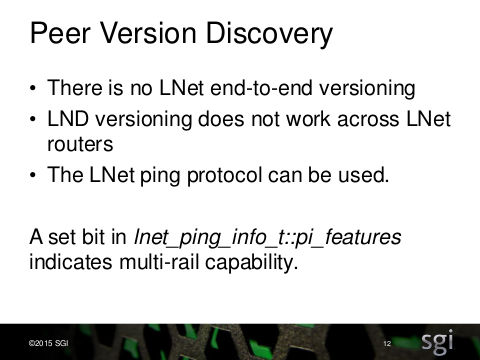 A multi-rail capable node would like to know if any peer node is also multi-rail capable. The LNet protocol itself isn't properly versioned, but the LNet ping protocol (not to be confused with the ptlrpc pinger!) does transport a feature flags field. There are enough bits available in that field that we can just steal one and use it to indicate multi-rail capability in a ping reply.

Note that a ping request does not carry any information beyond the source NID of the requesting node. In particular, it cannot carry version information to the node being pinged. 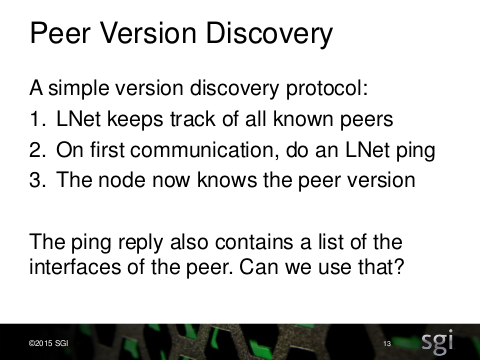 A simple version discovery protocol can be built on LNet ping.

And we get a list of the peer's interfaces for free. 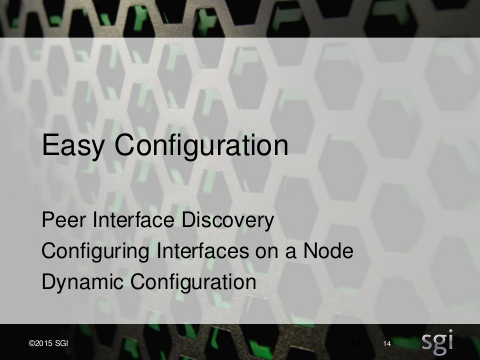 This section of the presentation expands on the second item of Slide 4. 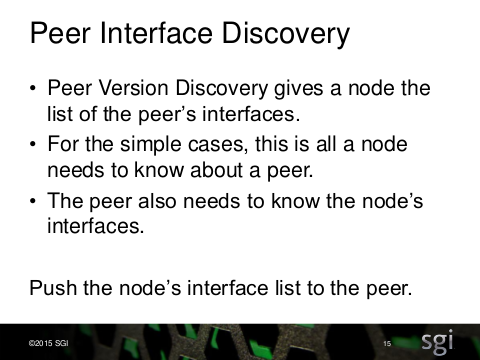 The list of interfaces of a peer is all we need to know for the simple cases. With that we know the peer under all its aliases, and can determine whether any of the other local interfaces (for example those on different LNets) can talk to the same peer.

Now the peer also needs to know the node's interfaces. It would be nice if there was a reliable way to get the peer to issue an LNet ping to the node. For the most basic situation this works, but once I looked at more complex situations it became clear that this cannot be done reliably. So instead I propose to just have the node push a list of its interfaces to the peer. 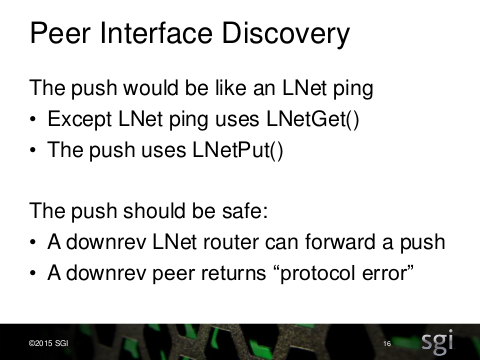 The push of the list is much like an LNet ping, except it does an LNetPut() instead of an LNetGet().

This should be safe on several grounds. An LNet router doesn't do deep inspection of Put/Get requests, so even a downrev router will be able to forward them. If such a Put somehow ends up at a downrev peer, the peer will silently drop the message. (The slide says a protocol error will be returned, which is wrong.) 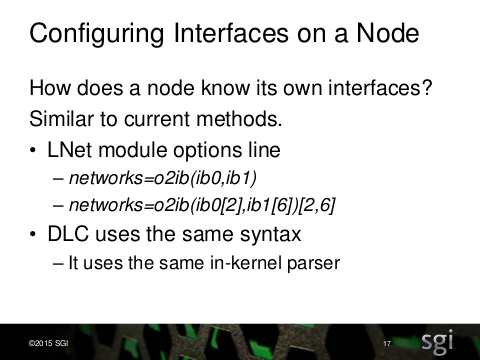 How does a node know its own interfaces? This can be done in a way similar to the current methods: kernel module parameters and/or DLC. These use the same in-kernel parser, so the syntax is similar in either case.

This is an example where two interfaces are used in the same LNet.

The same example annotated with CPT information. This refers back to Slide 3: on a big NUMA system it matters to be able to place the helper threads for an interface close to that interface. 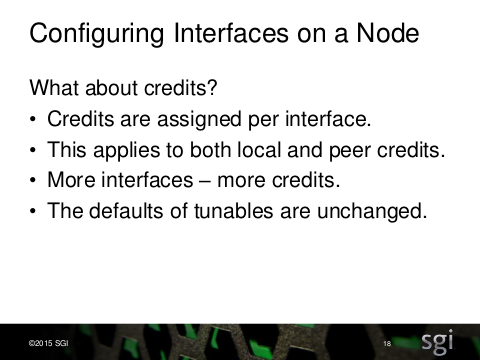 LNet uses credits to determine whether a node can send something across an interface or to a peer. These credits are assigned per-interface, for both local and peer credits. So more interfaces means more credits overall. The defaults for credit-related tunables can stay the same. On LNet routers, which do have multiple interfaces, these tunables are already interpreted per interface. 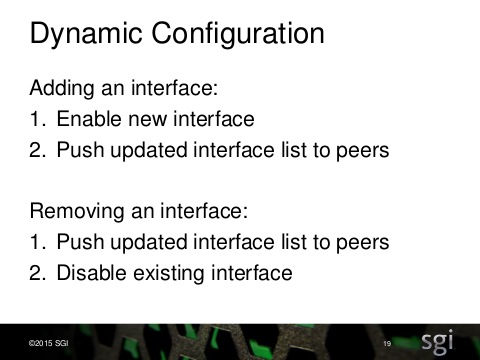 Note that removing the interface with the NID by which a node is known to the MGS (MDS/...) might not be a good idea. If additional interfaces are present then existing connections can remain active, but establishing new ones becomes a problem. 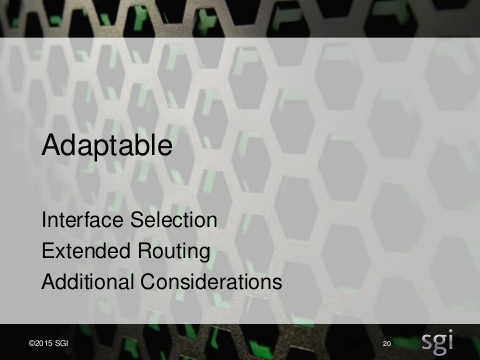 This section of the presentation expands on the third item of Slide 4. 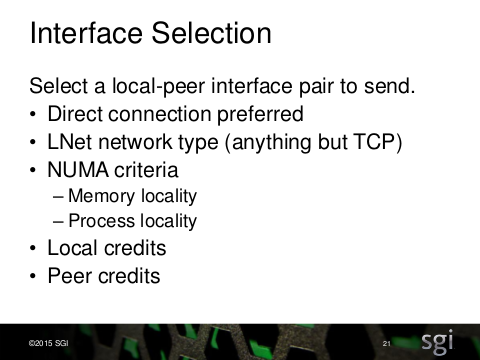 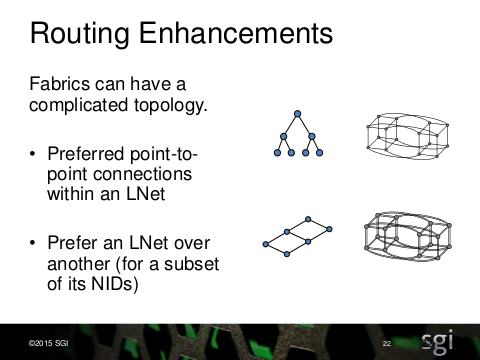 The fabric connecting nodes in a cluster can have a complicated topology. So can have cases where a node has two interfaces N1,N2, and a peer has two interfaces P1,P2, all on the same LNet, yet N1-P1 and N2-P2 are preferred paths, while N1-P2 and N2-P1 should be avoided.

So there should be ways to define preferred point-to-point connections within an LNet. This solves the N1-P1 problem mentioned above.

There also need to be ways to define a preference for using one LNet over another, possibly for a subset of NIDs. This is the mechanism by which the "anything but TCP" default can be overruled.

The existing syntax for LNet routing can easily(?) be extended to cover these cases. 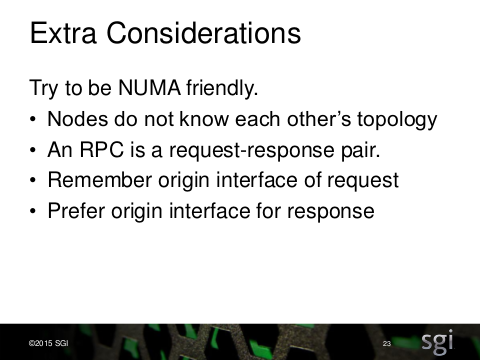 As you may have noticed, I'm looking for ways to be NUMA friendly. But one thing I want to avoid is having Lustre nodes know too much about the topology of their peers. How much is too much? I draw the line at them knowing anything at all.

At the PortalRPC level each RPC is a request/response pair. (This in contrast to the LNet level put/ack and get/reply pairs that make up the request and the response.)

The PortalRPC layer is told the originating interface of a request. It then sends the response to that same interface. The node sending the request is usually a client -- especially when a large data transfer is involved -- and this is a simple way to ensure that whatever NUMA-aware policies it used to select the originating interface are also honored when the response arrives. 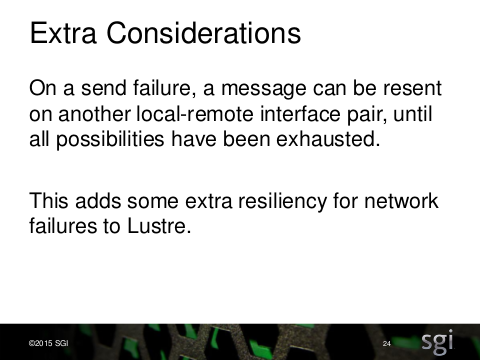 If for some reason the peer cannot send a message to the originating interface, then any other interface will do. This is an event worth logging, as it indicates a malfunction somewhere, and after that just keeping the cluster going should be the prime concern.

Trying all local-remote interface pairs might not be a good idea: there can be too many combinations and the cumulative timeouts become a problem.

To avoid timeouts at the PortalRPC level, LNet may already need to start resending a message long before the "offical" below-LND-level timeout for message arrival has expired.

The added network resiliency is limited. As noted for Slide 19, if the interface that fails is has the NID by which a node is primarily known, establishing new connections to that node becomes impossible. 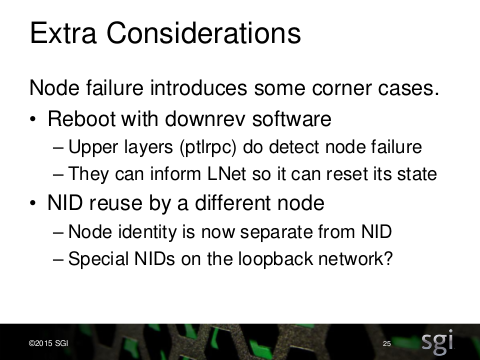 Failing nodes can be used to construct some very creative scenarios. For example if a peer reboots with downrev software LNet on a node will not be able to tell by itself. But in this case the PortalRPC layer can signal to LNet that it needs to re-check the peer.

NID reuse by different nodes is also a scenario that introduces a lot complications. (Arguably it does do this already today.)

If needed, it might be possible to sneak a 32 bit identifying cookie into the NID each node reports on the loopback network. Whether this would actually be useful (and for that matter how such cookies would be assigned) is not clear. 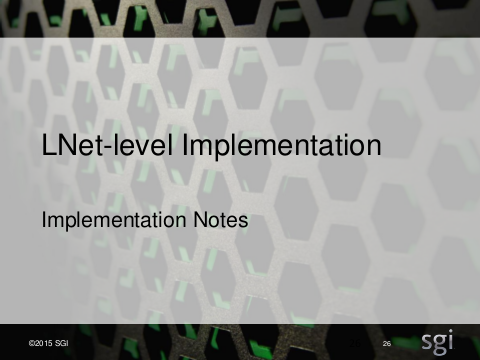 This section of the presentation expands on the fourth item of Slide 4. 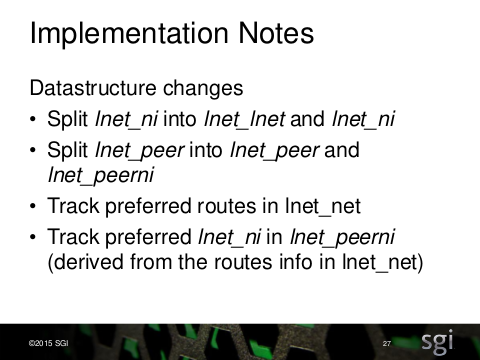 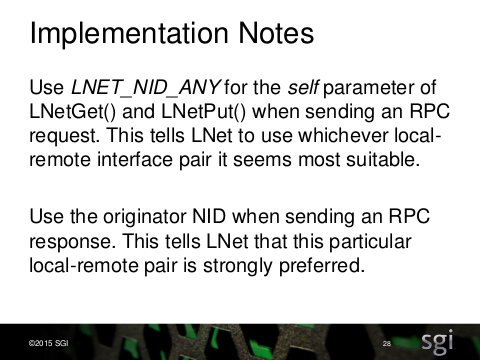 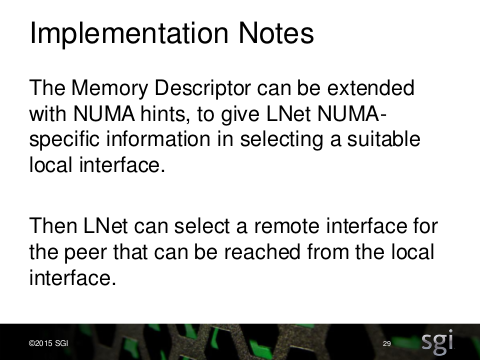 A staccato of notes on how to implement bits and pieces of the above. There's too much text in the slides already, so I'm not paraphrasing. 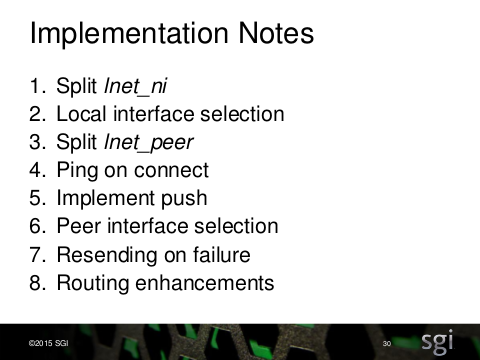 This slide gives a plausible way to cut the work into smaller pieces that can be implemented as self-contained bits.

There's of course no guarantee that this division will survive the actual coding. But if it does, then note that after step 2 is implemented, the configuration of Slide 11 (single multi-rail node) should already be working. 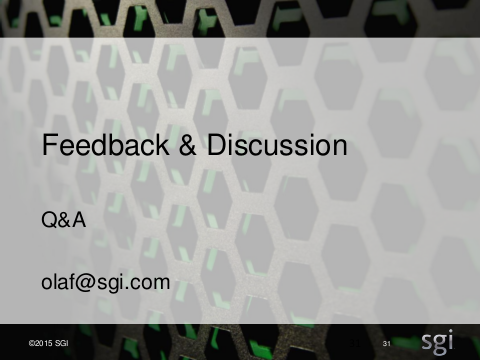 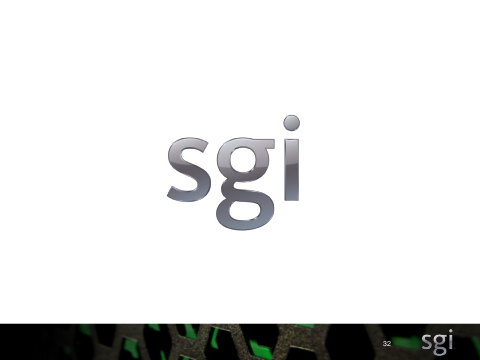